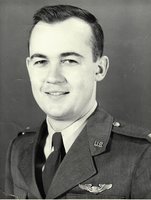 Jack was born in Forsyth County on September 5, 1929 to the late Lum and Bessie Hester. After graduating from high school, Jack joined the United States Air Force. He completed Cadet training in 1952 and loved flying jets. In 1958, Jack was in the first class to graduate from Wake Forest University in Winston-Salem. He would later work for the United States Government for thirty-five years including working for the Civil Service Commission. He later completed his career as a Principle Security Agent with the FAA.

Jack was an avid tennis player and belonged to the Atlanta Tennis Association where his team won several tennis city championships. He was a longtime member of Morris Chapel United Methodist Church, where he taught the Robert West Sunday School class for 10 years.

The family will receive friends from 1:00PM until time for service at the church.

In lieu of flowers, the family asks that donations may be made to the Morris Chapel United Methodist Church, 2715 Darrow Road, Walkertown, 27051.

“The family wishes to thank the Phelps family, and the Morris Chapel United Methodist Church family for being so kind and helpful during this time.”