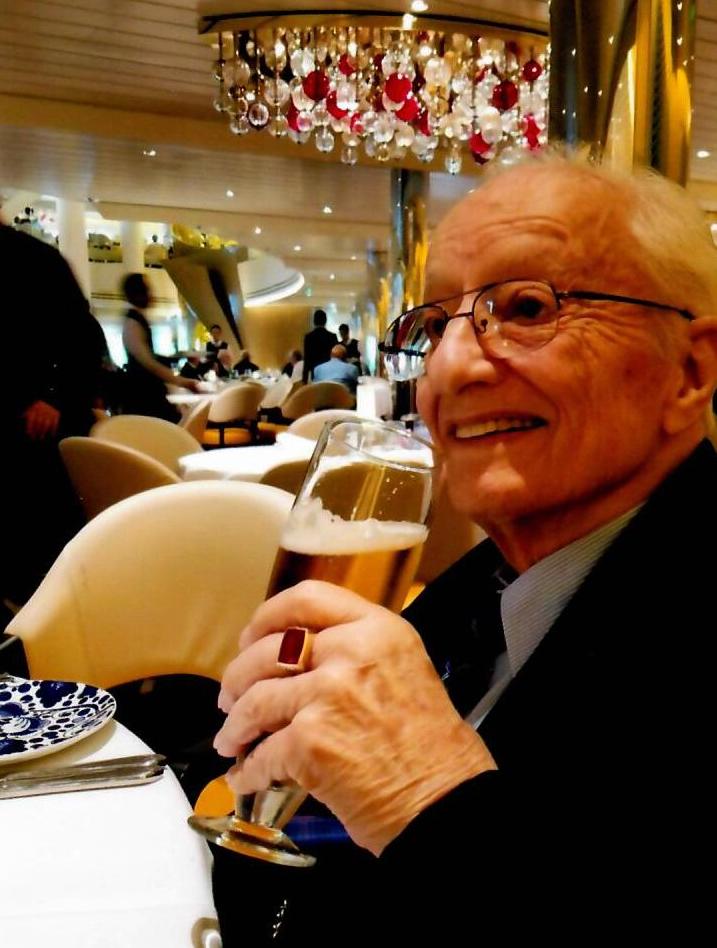 A memorial service celebrating his life will be at a later date.

A native of Amsterdam, Netherlands, Frank was the husband of 38 years to Kathleen “Kathy” Lesmeister.

Frank served in the Dutch Navy and afterward sailed for Holland America Cruise Line as a steward around the world.  He worked for Hilton International Hotels in Istanbul, London, Montreal and Denver.  He loved Colorado and lived there many years enjoying hunting, fishing and camping.  He owned a very popular continental cuisine restaurant in Denver and worked in many other fine dining establishments. He was a gourmet chef and enjoyed cooking for many friends and family.  He lived in San Francisco where he met his wife Kathy and later they moved to Florida for her job.  He worked at Epcot at Disney World and loved meeting the children there.  He and Kathy loved to travel the world and went on more than 30 cruises together.  Frank loved nothing more than to sit on the balcony of a ship, sipping a Heineken and watching the ocean waves.  He was a true sailor at heart!  His and Kathy’s last cruise was in April this year to Amsterdam on Holland America – very fitting indeed!

In 2003, Frank moved to North Carolina with Kathy and loved it immediately.  Travel on the Blue Ridge Parkway in different seasons was always a joy.  He was very adventuresome and enjoyed zip lining and white water rafting well into his eighties.

Frank spoke four languages and was a great travel companion to his wife. His final job was in security in the reservation center in Winston Salem, North Carolina for US Airways.  He enjoyed meeting and talking to the employees, always with a smile.  He truly was a “people person” and very outgoing.  He touched of lives of many and will be sorely missed.

Survivors include his wife, Kathy of the home; daughters, Astrid of Florida, and Jennifer of Colorado; sons, Frank, Jr., Richard, and Andy all of Colorado; several grandchildren and great grandchildren; sister, Jopie and husband, Ton, and brother, Anton, all of the Netherlands.  He was the “Dutch Uncle” to many nieces and nephews and fondly known as “Shoemaker” to many.

Frank was preceded in death by his parents and a sister of the Netherlands.

In lieu of flowers, memorial contributions may be made to Trellis Supportive Care, 101 Hospice Lane, Winston-Salem, NC 27103.

Services for Frank Lesmeister
There are no events scheduled. You can still show your support by sending flowers directly to the family, or planting a memorial tree in memory of Frank Lesmeister.
Visit the Tribute Store

Share Your Memory of
Frank
Upload Your Memory View All Memories
Be the first to upload a memory!
Share A Memory
Send Flowers