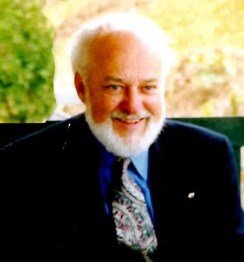 “Thou wilt keep him in perfect peace whose mind is stayed on thee because he trusteth in thee.”

Jerry Lamar McEntire, 84, died peacefully December 26, 2019 at home surrounded by his loving family after a short battle with cancer.

Funeral services celebrating his life will be 2:00PM Sunday, December 29, 2019 at Sedge Garden United Methodist Church with Pastor Justin Lowe officiating.  Inurnment in the church columbarium with military honors and Masonic Rites will immediately follow.  The family will receive friends in the church beginning at 1:30PM on Sunday.

Jerry was born May 17, 1935 in Dalton, Georgia to the late Mary Lee and Henry Lee McEntire.  He graduated from high school in Atlanta, GA and was an alumnus of the University of Georgia. Jerry was raised in the Southern Baptist Church and was a member of Jamestown Methodist Church. He worked in industrial electric sales and was honored with the “Endangered Species Award” for his successful sales career. He retired from Cameron and Barkley Electrical Wholesale Distributors.  Jerry is a veteran of the Korean War serving his country honorably in the US Army, a 32nd degree Mason of the Scottish Rite of Winston-Salem, NC, a member of the Masonic Lodge #669 in Kernersville, NC, and the York Rite Bodies of High Point, NC, the past Eminent Commander #24, past master of the Numa F. Reid Lodge of High Point, NC, and an Oasis Shriner in Charlotte, NC.

A man is known for the loves of his life.  Jerry loved his family, friends, Georgia Bulldogs, fishing at Harker’s Island, duck and pheasant hunting in Nebraska and Hyde County, Ocean Isle Beach, the USA, and the Mason’s dedication to children and widows.

Family and friends may sign and view the guestbook at www.Pierce-JeffersonFuneralService.com