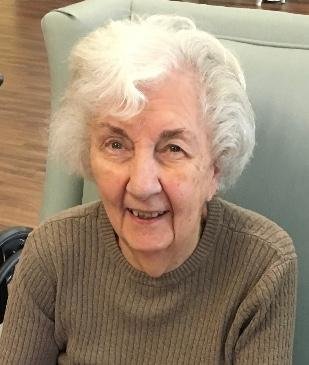 Funeral Services celebrating her life will be held at a later date in Potsdam, NY.

A native of Thorntown, IN, Peggy was the wife of the late George McLennan and the daughter of the late John Paul Carpenter and Rena Olive McKinsey Carpenter. Peggy grew up in Thorntown, IN and later lived in Lebanon, IN. She went to Butler University, Indianapolis, IN and then attended Crane School of Music in Potsdam, NY where she eventually taught school. However, her first teaching jobs were in Nova Scotia and Bermuda. While in Potsdam, NY, Peggy met her husband, George who had five children ranging in ages six to sixteen.

In addition to her husband and parents, Peggy was predeceased by her stepsons, Ronald McLennan and Donald McLennan.

In lieu of flowers, memorial contributions may be made to the Kernersville Little Theatre, 152 South Main Street, Kernersville, NC 27284.

Services for Peggy McLennan
There are no events scheduled. You can still show your support by sending flowers directly to the family, or planting a memorial tree in memory of Peggy McLennan.
Visit the Tribute Store