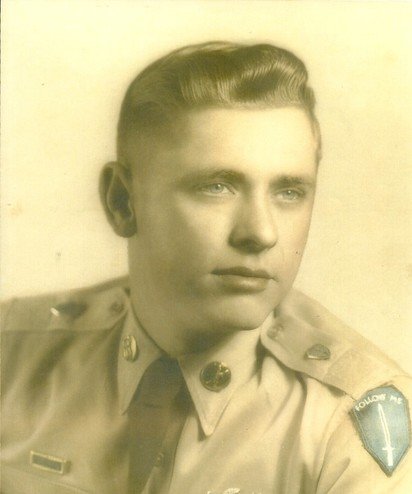 John was born on July 7, 1931 to Morris Dale and Bertha Hood in Johnston County, NC.  He left his home as a young man to join the army and fight in the Korean War.  He fought hard for his country and was wounded in combat forcing him to return to stateside for recovery. He received an honorable discharge in 1952 with the rank of Corporal.

In December of 1954, he married Gloria Faye Carroll.  They have been together for 66 years and have 4 children.

He worked for the State of North Carolina in Raleigh as a surveyor and was sent to  Greensboro to work on the Wendover Avenue Project. He loved Greensboro and wanted to make this his home.  In 1955 , he accepted a job as Surveyor Party Chief with the City of Greensboro and moved with his wife.  He retired in 1979 but never stopped working.  Some of the jobs he had was driving an oil truck for Berico Fuel and as a locksmith for Higgins Cycle.  He later started his own business, Hood’s Lock & Key. While he was always busy, he never forgot his roots and spent many weekends in Zebulon, NC visiting with family and attending to the family farm.

He leaves behind his wife, Gloria Faye Hood, his sons David (Rita) and John (Ruth) of Browns Summit, daughter Donna Szyzytko (Aaron) of Mt. Pleasant, SC, son Eddie (Miriam) of Wentworth, NC. And one sister Louise of Hollywood, CA.  He had 9 grandchildren and 7 great-grandchildren. He was preceded in death by his parents, sisters Jewel and Mary Alice and brothers, M.D., Allen, Charles and one granddaughter, Alayna.

The family will be at Pierce-Jefferson Funeral Home (300 W. Wendover) on Sunday, March 21, 2021 between 4-6 pm.  A graveside service will be at Lakeview Memorial Park on Monday, March 22 at 1:00 pm.  Donations can be made to Authoracare of Greensboro (2500 Summit Avenue, Greensboro, NC 27405). Special thanks to the staff at both Authoracare and Morningview Assisted Living for their excellent care for “PaPa”.