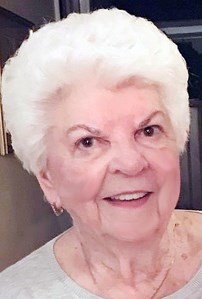 Elva Slate Kennedy, 88, of Palm City, FL, peacefully passed away on March 20th after a hard-fought battle with cancer.

Elva was born on October 9, 1932, to Luther and Annice Slate in Francisco, NC. She was raised in Greensboro, NC, where she met the love of her life while attending Grimsley High School. Elva and Charles married in 1950. During those 70 joyous years, they were blessed with 3 wonderful children. Elva devoted her life to raising their children with the same love, compassion, and strength that she herself contained. Throughout Elva's life, the things that brought her the most joy were spending time with her family, reading books, golf, and watching her family flourish and grow.

Elva will be remembered by all as a woman who loved the Lord and her family above all else. Elva was an extraordinary wife, homemaker, cook, loving mother, grandmother, and a dedicated friend.

In lieu of flowers, the family requests that donations be made in Elva's honor to Cancer Research Institute (www.cancerresearch.org to help support cancer research.

On March 27th at 11 a.m., there will be a private celebration of life officiated by Bob Turner, a family member, at Pierce-Jefferson Lambeth Chapel (300 West Wendover Avenue, Greensboro, NC 27408), which will be followed by a 1 p.m. graveside service at Forest Lawn Cemetery (3901 Forest Lawn Dr., Greensboro, NC 27455).

Share Your Memory of
Elva
Upload Your Memory View All Memories
Be the first to upload a memory!
Share A Memory
Send Flowers