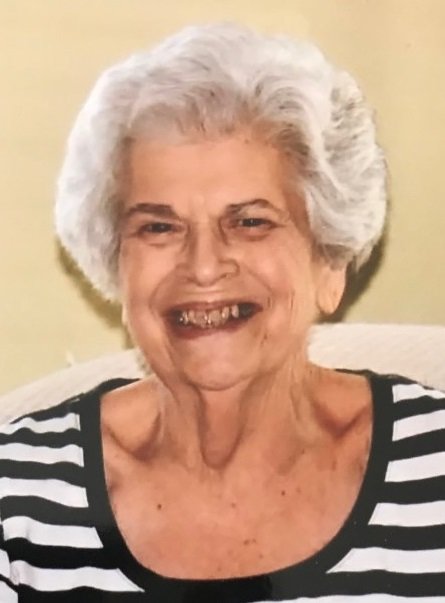 Mary Lou was born in Cleveland, Ohio May 1st, 1931.   Mary Lou grew up in Montrose, California where her brother introduced her to a young sailor, Harold Barham, of Wendell, NC.   Harold and Mary Lou were married over 40 years and had two children, Diana Lentz, of Kernersville and Daryll Barham of Lakeside, CA.

God knew it was time for Mary Lou to be free from pain, waiting to greet her were her husband Harold, parents Antonio and Mildred Scarpaci, two brothers Johnny and Gordon and grandson Dana.

Mary Lou was an accomplished and creative artist in several mediums including; pottery, weaving, woodworking, artistic clothing, rug hooking, flower arranging, and especially quilt making, she even built a surfboard with her son.   Mary Lou was recognized for many of her accomplishments.  Of course, when it came to cooking, gardening, and entertaining she was a master.

As a young mother Mary Lou and her lifetime friends were very involved in PTA where mom was President.   Mary Lou and the gang were instrumental in leading parents to create well attended fund-raising events that built a playground, Library, and other necessary items for schools.

One day in the early 60’s her dear friend Bernice Johnson of Spring Valley, CA and mom decided to take a trip to Burbank to a new show called “The Price is Right” with host Monte Hall.   Low and behold both were chosen as contestants on the show and both won prizes!   The dining set mom won is still in use today by her granddaughter.

In the 60’s Mary Lou and Bernice formed their own all women Painting Co. in San Diego.   Just the two of them and a silent partner for the books.   They did the work themselves, cleaning, painting, and even plumbing!

Mary Lou loved sports especially the San Diego Padres, and NASCAR.   After moving to Kernersville in 1993 NASCAR was what she really enjoyed.   Her favorite driver was “Jimmy Johnson”, if he was out of the race she was done.

In 1976 Bicentennial, quilting had a revival so mother (always learning) took a class and was hooked!   Mother started working at the Country Loft in La Mesa, CA where she began her love of teaching others to quilt.   She was a Founding Member of “Sunshine Quilters of El Cajon, CA” in 1979.

After moving to Kernersville in 1993 she met Terri La Rue, Terri opened Quilting Peace by Piece.   Mary Lou continued her love of teaching at Terri’s shop and continued working.   Mary Lou was also a founding member of “Heart of the Triad Quilt Guild”.

Mary Lou loved family activities and spending time with her grandchildren and great-grandchildren.   She was a good cook carrying on the tradition of making crave worthy Apple Pie she learned from her mother.

Mary Lou had a very full life, always enjoying learning, creating and making friends where ever she traveled.

Thank you to Hospice caring guideline, also for mother’s comfort care during her final days.   Your support and words of encouragement made a difference.   Thank you to the caring staff at Kerner Ridge.

A Celebration of Life Ceremony will be held Saturday, July 10th at 11:00AM in the Chapel of Pierce-Jefferson Funeral Service, 213 West Mountain Street, Kernersville, NC 27284 with a Memorial Reception following in the Jefferson House after the service.    She will join her husband in Salisbury National Cemetery at a later date.

Condolences may be shared with family at www.pierce-jeffersonfuneralservice.com

Share Your Memory of
Mary Lou
Upload Your Memory View All Memories
Be the first to upload a memory!
Share A Memory
Send Flowers